Jan was introduced to RC sailing in the late 1970s while he was in the UK buying sails from Neil Thornton of Number 1 Sails. He was soon a strong advocate of this very special discipline of sailing, as he saw it, within Sweden and further afield getting involved with the international body, the International Model Yacht Racing Union (IMYRU) soon after. Jan’s vision for the sport and his many contacts with the International Yacht Racing Union (IYRU) overcame Norman Hatfields’s natural caution as chairman to accept that it would be for the benefit of the sport, when he encouraged discussions that brought about the creation of the Model Yacht Racing Division of IYRU (MYRD-IYRU), the forerunner of the IRSA. Along the way Jan spent considerable time attempting to resolve the existence of the two bodies that sought to represent ‘international’ model yachting, Naviga, which also handled other forms of model boating, and the IMYRU. This led directly to the combined Naviga and IMYRU world championship for Marblehead and Ten Rater classes in Berlin in 1988. Sadly that duality remains unresolved but it was not through lack of effort or imagination on Jan’s part. 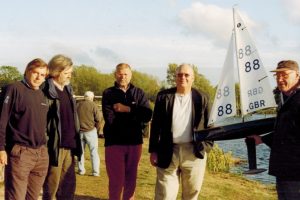 When he became responsible for the technical work of IMYRU in the 1980’s, Jan found a perfect place to use his ability and interest in such matters. A much needed revision of the Marblehead class rules soon followed and addressed the weakness in sail area measurement exposed by the recent advent of swing rigs with highly bent masts. The revised rule used the now familiar and widely accepted cross width measurements to treat sail area measurement fairly. Amazingly it was so revolutionary at the time that its adoption was delayed for a year. Sadly this illustrates the reaction that Jan often met when he proposed solutions to problems that others failed to grasp or acknowledge. He rationalised this by wondering if the imagination of RC sailors was scaled down in proportion to our boat size. His interest in bringing logic and clarity to the structure of class rules combined with his vision when he attempted to bring the various ‘One Metre’ class boats being built in the late 1980s into one ‘international’ class. This led to the creation of the 1988 IOM class rule in which I had the pleasure of collaborating which was, in effect, the first version of what is now the World Sailing Standard Class Rule format. Like most major transformations it needed more refinement as time went by and Jan showed he was always prepared to consider ways to improve what had already been done regardless of where the proposals came from. This was no problem for Jan who had the remarkable ability to be self-critical, perhaps the mark of a true artist and learned from his parents, both very gifted artists. Indeed his professional work was as an architect, artist and designer all rolled into one – his Linked In page aptly described him as an Arts and Crafts Professional. Quite modest about his work, it was
something he rarely spoke of. The one piece of work he told me about was a massive wall of glass in the Goteborg Opera House that displays the names of the thousands of donors of even quite modest sums of money collected for its construction. He had designed a special
font that was used to print their names onto paper strips which were ‘laminated’ between the glass panels. Those who were at the first Hatfield Trophy after Norman died will have a piece of Jan’s work in the design on the commemorative whisky tumbler given to each competitor that year. 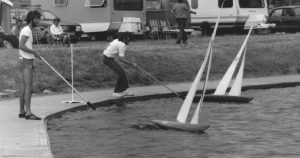 By the 1990s Jan was heavily involved in the work of the IYRU via various committees. He served as Chairman of the International Measurers Committee, Vice Chairman of the Measurement Committee and was a member of the Race Officials Committee. He was one of the prime movers behind the development of the Standard Class Rules (SCR) concept for IYRU. The purpose of this project was to enable any class to adopt a common format for its class rules and, importantly, to enable manufacturers to produce equipment that could be bought ‘off the shelf’ and be class rules compliant. This meant drafting class rules that permitted, for example, sails, masts, booms, rudders, centreboards etc to be ‘measured’ remote from other equipment with which they would be used. This would bring benefits to the manufacturers, measurers, race committees and sailors alike. The working party quickly realised an essential first step would be to establish a common language, a set of definitions of the various parts of a boat, which we now have in the Equipment Rules of Sailing (ERS). Once the ERS were developed enough it was possible to draft a set of SCR which would act as a template for any class wishing to use it. As ever Jan applied his high level of professionalism to the task as well as his usual caution. I recall him saying he was quite worried about some proposal or other he had made because all present were in agreement, something which made him doubt he had got it right.

Not only was Jan more than competent working within technical areas, he was also fully at home working with the Racing Rules of Sailing. He organised the 1987 Ten Rater world championship held in Goteborg, attracting 38 entries. Although not an International Judge he served on the international juries at many major events including Stockholm 1983, Goteborg 1987, Berlin 1988, and Orbetello 1989. When I asked him why the ‘wrong’ boat had been disqualified in a protest he said that my evidence as an observer had been identical to that of the disqualified competitor and the jury concluded we had colluded! We had not, but a good lesson to learn – never speak to those you call as a witness beyond asking them to give evidence.

Having created the IOM class he was, not surprisingly, quite protective about it especially in its early stages. He moved on from being responsible for technical matters for the MYRD to become its Vice Chairman but was incredibly patient, generous and helpful in giving assistance to me when I took over the technical role in 1994. These characteristics seem to be essential for someone who does not seek to be ‘the leader’ but is content to work alongside others, or in the background, providing encouragement, expert assistance and support where required. Evidence of this can be seen too in his part in the creation of the International One Metre Owners Association, which started under Chris Jackson’s guidance and evolved fully under Lester Gilbert’s. Once IOMICA was up and running Jan saw his contribution to RC sailing as largely fulfilled and was content to retire graciously. The ‘child’ he had created had reached adulthood. 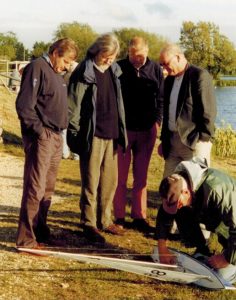 However, his interest in RC sailing was retained and he did acquire an IOM for himself although it is not clear if he did much racing with it. He contracted cancer some six years ago and, after initial treatment that failed, was given a new treatment that worked remarkably well. Sadly by the time he came out of that his wife, Annika, was diagnosed with terminal cancer and died shortly after. This seemed to trigger a period of depression which was followed by dementia. Recently he was able to live close by his daughter, Eva, and grand-daughter and could joke about the ‘young fellow’ he saw in photos of himself sailing a free sailing A Class at Gosport in the 1980s.